You learnt to run when you were a toddler. You’ve been doing it ever since. When it comes to becoming a serious runner, however, it pays to pause and check that the way that you run is the right way for you. Running is a skill and learning the proper technique will allow you to do it more efficiently. That means that you’ll be exerting less energy when you run, making the whole process easier. Learning to run properly will also lower the risk of strain and injury.*

The Basics of Running

Good runners run tall, that is they are in an upright rather than a stooped position when they run. They have a slight forward lean. Their arms are bent at 90 degrees and pump naturally as they run.

We can consider running as a cycle of actions. It has two main phases; floating and stance. Floating occurs when both feet are off the ground. The stance phase can be further divided into toe off, swing, strike and support phases.  Let’s consider these phases one at a time: 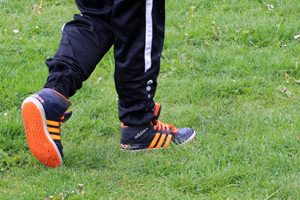 To initiate movement, the knee of the leading leg drives forward, while the trailing foot leaves the ground. The power of this movement comes from the Achilles tendon and calf muscle. During this phase, new runners have a tendency to lean too far forward. This has a negative effect on their stride angle. By leaning from the ankle, rather than the hip, you will enable a wider stride angle when driving the knee at toe off.

This is the longest phase of the running motion. Your legs are moving forward through the air, swinging through in preparation for the next foot strike. The hip flexors pull the trailing leg through and the hamstrings slow the leading leg in anticipation of it striking the ground. Be sure to allow your trailing leg to cycle through naturally and that the arms are bent at right angles and rotating from the shoulders.  This arm movement will help to set your running pace.

As it strikes the ground, the body absorbs several times it’s own weight. For proper absorption, the front foot should be slightly in front of the body. The landing foot should also be quite flat as it comes down.

There is much debate over what constitutes the ideal foot strike. Some runners prefer a mid-foot strike on the ball of the foot and heel simultaneously. This transmits the impact force evenly up the leg. Others go with a heel strike, landing first with the outside of the heel, then rolling inward to load the arch. A forefoot strike is typically used by speed runners, with the landing taking place on the ball of the foot, on the outside edge. Whichever strike you go with, be sure to avoid a heavy landing.

This is the mid-stance, just after strike. The leading leg is directly under the hips. The body is traveling forward, over the leg in preparation for the next toe off. The leading foot arch flattens against the ground, as it stores energy in readiness for the next cycle to begin. 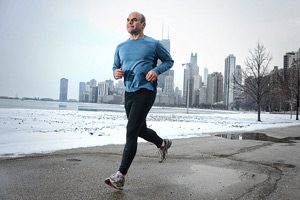 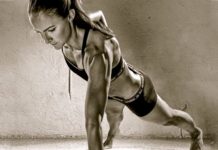 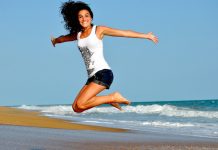 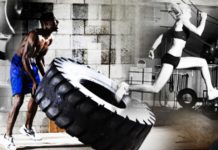